I asked my World History classes to reflect on their school year.  Here is what they answered to the first question:

It's very interesting looking at these numbers.  Obviously our Video Project ( see the Video Project Blog here ) had a huge impact.  It is great to see that the kids enjoyed it.

The Castle Project was a pretty close second.  This can be a massive project.  But, the students put a lot of creativity into it.  Many students commented negatively about this project as well (I'll run those numbers later).  And I may continue to tweak it to make it better and a situation where students might be able to learn more.

I only used Philosophical Chairs during the fall semester and Socratic Seminar during the spring.  I am going to change that up next year and mix them up more.  And I am going to use both more.  I think the numbers would have been higher if we would have done them more often.  It is just hard to turn things over to the class sometimes as a teacher.  The benefit is that they learn from each other in their own language and it is a powerful way to get ideas across.  I just have to plan and work harder to get these activities into the class better.

Trench Warfare was fun (as it always is).  We take two sheets of notebook paper, make balls out of them, divide the class into two teams - East and West (Germans and French) and have them fight it out in trenches.  The trenches are created by using the rows in the classroom.  It is fun and it does give the students a bit of a feeling of what it must have been like to hide, attack and maneuver through the trenches.

Here is the form I used for the survey (adapted from one that MissTeacha inspired me to use):
Year End Reflection-WH
Posted by Duez at 5:26 PM No comments:

I just love this video. Found it on Karl Fisch's Fischbowl.

After you get past the introductory portion about the professors, there is real vision here. They imagine an English department of content creators using Web 2.0 technology and not just the typical, read and write papers curriculum. Fantastic imagination.

For my own personal classes, I consider this a great challenge: Get students ready for a world that is improving faster than schools can keep pace with and the pace will keep getting faster. So what can I do? Chip away at the process by starting students down the road of content creation.

In my 5th six week's period my students this year created videos and we showcased them on this site: VideoProject09.Blogspot.com

It is my hope that the students learn how to create content in a stronger way. And it is my hope that they can move people in a new direction. As they said in the Rutgers video - Content Creation, Creativity through the portal of connected and networked computers.

I am very lucky to have a technology background, but I do believe that any teacher can start down this road and improve it. When I first started my "Video Project" it was merely a power point project. But, as technology has changed we changed with it. And I learned as much from my students as I have passed on to them. That is so much fun for a teacher!

Teachers out there, this is the time - it's summer. Think outside the box and try to find ways to give your students a chance in this new world.
Posted by Duez at 7:26 PM No comments: 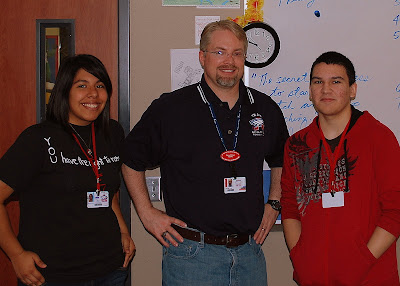 Continuing with another letter of appreciation from a student. This one was handed to me in our main hallway (called "Main Street") as I was running to class the other day. The student stopped me and just had this big look in their eyes. He just said, "Mr. D. I wrote this for you, I mean every word of it and Thank You for everything this year." I was stunned. But, not as much as when I sat and read it.


Dear Mr. D,
Easily the greatest man I have ever met in my life. I envy the happiness that you have, the love you have for your wife, your son, your job, and every aspect of life. From what I can tell you must have had a difficult childhood, but you took the best out of it and became somebody important.

You never gave up on me no matter what, and to have you there saying I could do it was so helpful. The last few years for me have been rough, especially this year. For the career project when my group stood up and I said I wanted to be a lawyer and you commented that I could do it most definitely, well that almost brought me to tears.

You tell me that I have so much potential, well Mr. D. I will try to push through the bad and be all that I hoped to be and more. You are someone I look up to and hope that I will be like one day. Your son is so very lucky to have a father like you to grow up learning from. The world is a much better place with David D around. I know I would have been lost this year without you.

Whatever I do in this life I just hope that I can reach your level of happiness. I hope that one day I will be like you, Mr. D. I do not think there are words to express how I feel. All I can say is thank you for everything. I will not let you down, never change, and I will see you down the road.

I will never forget you or all that you have done for me Mr. D.

Kind of leaves (even me) speechless.

I put this on my blog for 2 reasons:

1) I hope some teacher somewhere reads this and realizes that you never know what kind of impact you can have on a student. Every day I come to work and try to be consistent and show passion for my job and build relationships as best I can with my kids. Sometimes we forget that what students are going through when they are not at school can be pretty tough. Being there for them is important. Never forget the impact you can have.

2) I hope Aidan reads this some day and understands why my job is important to me. I hope some day he realizes that a job is not just measured by a pay check. Sometimes the pay that isn't in the paycheck is priceless.
Posted by Duez at 7:29 PM No comments:

Email ThisBlogThis!Share to TwitterShare to FacebookShare to Pinterest
Labels: Reflections 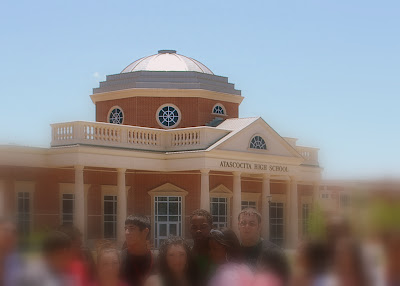 I have had several notes of appreciation from students in the past week. They really have meant a lot to me. I am going to type a few out here, but they are not for me... really they are for Aidan. I want him to be able to see why I do what I do.

When I left technology and turned down a lot of money to come back and teach, I hoped I would have an impact. That's really part of the pay. Knowing that what you do for a profession has the chance to improve the lives of others means a lot to me.

So here goes, the first letter was from an AVID student that gave me a Starbucks gift card for my birthday a few weeks ago. I know she probably can't afford to give me a gift card so it really meant a lot that she'd spend any amount of money towards something for me. She is a special young lady. All As in her classes. And she has 3 honors classes! So very proud of her.


This is for the most amazing teacher ever who never gives up on his students, is always there for anyone who needs help, and is an amazing role model. I thought this card would be perfect for you because I know you also long to see the world changed. Thank you for caring for us and may God bless you with an amazing birthday!

On the Starbucks card it said that money from purchases goes to support the Global Fund. She has the biggest heart and is always concerned about others. She wants to be a youth or childrens minister/pastor when she grows up. I think she'll be incredible at anything she chooses to do.

This was a letter that I got on that crazy Friday when we had a lock down on campus. This student has gone through a lot this year and it was the last full day of class. Everyone else was taking a test, but she was working on the quiz she missed a few days before. After she finished the quiz, she wrote this note and gave it to me. Then she asked if she could read it to the entire class. Of course we were all pretty emotional and stunned.


Mr. D, I've never really showed or have said how much I appreciate having you in my life. So I sit here and write to you. You've helped me in to understand that things in life come and go and sometimes there are road blocks along our path that we must break through. This year hasn't been the easiest, but the most worth while of my life. To be honest, I love my fifth period class and the adventures and journeys in here have been wonderful. It's come from not just the bottom, but through my whole heart to say you are THE GREATEST TEACHER on the face of the earth and probably the kindest most compassionate man I will ever come to know. I never knew that one person could change the outlook on the way I see life until I met you and I'm glad I did. I came into this year with very little self confidence and I am coming out strong and with pride and with so much confidence that I never knew I could have. So, I want to thank You Mr. D for teaching me not just what I can find in a book, but the things I will use for the rest of my life and with that I hold dear to my heart and go on to do something good with my life.

Stunning. It really gets to me, but I am just so happy that she is feeling better about herself.

So, Aidan... when you are old enough to finally read this on your own, "Pursue a job that isn't just a job... but something you are passionate about. Find the job that when you look at the clock on the wall, you hope it slows down because you have so much more to do today. Not the job where the clock on the wall is creeping along and you are hoping it could speed up until quitting time. It makes all the difference in the world."