Breakfast, Lunch, and a Diet Coke. The Estates General Simulation

We had a lot of fun on Friday at the beginning of class.  I used the first 10 minutes to conduct a simulation of what it must have been like for the Estates General of France in pre-revolutionary times.  King Louis XVI and his ministers called the Estates General (the French parliament or congress at the time) to session because the country was ravaged by war debt, food shortage, and also a bitter cold winter.  The lawmakers had not met in 175 years.  (Which always prompts a question from a student, how old were those guys anyways, 200?) 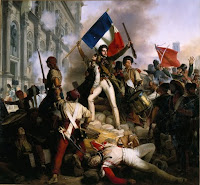 The problem with the Estates General was that it was setup in a 3 vote system.  The 3 estates each had one vote a piece.  The 1st estate was the clergy, 2nd was the royalty, and the 3rd estate was everyone else (basically 98% of the people!).  Each estate having one vote, it was easy for the 1st two estates to outvote the 3rd every time.  So the first two would never pay taxes and the third would.

So I asked first period, how could we simulate this and they said, "Well, we would have to vote on who would pay the tax."  I said, "What would the tax even be?"  So I proposed in 1st period that whoever lost the vote would have to bring Mr. Duez breakfast on Monday morning!  (Of course I was kidding, but it was a fun thing to kid about)

Pretty quickly I determined that two young people sitting next to each other were both wearing crosses.  They were the clergy!  In the back we had a young man all dressed up in a suit and tie.  He was obviously taking Communication Applications (Speech) and all dressed up for that.  I said, "You are the king!"  The young lady sitting with him was the queen.  They represented the royalty.  The rest of the classroom was the 3rd estate - everyone else.

I gave them about 2 minutes to discuss it among themselves, how they would vote.  1st period very quickly formed an alliance between the first two estates and I had a great time laughing about how great my breakfast would taste on Monday.  The third estate (all of the class except for 4 kids) immediately got upset.  I said, "Are you upset enough to execute the king and revolt?"  I then had the kids think about how they must have felt in France at the time.  Starving and in the middle of a bread shortage.  They were enduring the worst winter conditions in 90 years.  No wonder they wanted to cut some heads off!

It was a neat simulation because I could see the kids face react as we went along.  Sure they can witness a video describing the three estates and how the Estates General works.  But, when they were actually in the middle of it, it quickly became apparent how unfair it all was. 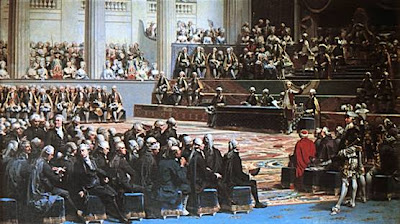 A meeting of the Estates General in France.
Later in the day 5th period played the simulation, but it was for Mr. Duez's lunch on Monday.  It played out exactly as in first period.  The Third Estate was paying.  But, in 6th period things were different, as they usually are.  Of course, things did not play out how you thought they would.  They had the clergy paying the tax.  I was just shaking my head.  So we had to discuss it a little longer to explain exactly how things worked during the pre-revolutionary days of France.  Hopefully they understood what the heck was going on.  But late in the period, one of the members of the clergy asked me, "Mr. Duez what do you want your Diet Coke in?  A bottle or can?"

Maybe Monday evening I'll be writing about my wonderful breakfast, lunch and diet coke?  :)  Hopefully during the test the students will remember the mess that was the Estates General. 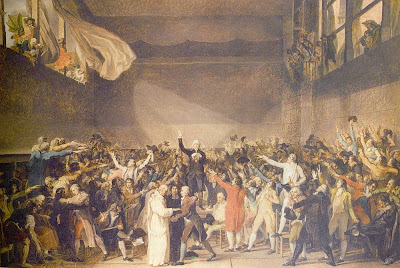 The result of the first meeting in 175 years of the Estates General?  King Louis XVI had the doors locked the next day.  The members of the third estate went to the neighboring handball court and took what is called the Tennis Court Oath - vowing to meet until they establish a new government.  They called themselves the "National Assembly."
Posted by Duez at 8:16 PM