We have a new Facebook group of teachers at our school.  It just started this week but it has already been very supportive and positive.  One of the teachers posted a question, "What has been your most memorable teaching moment?" 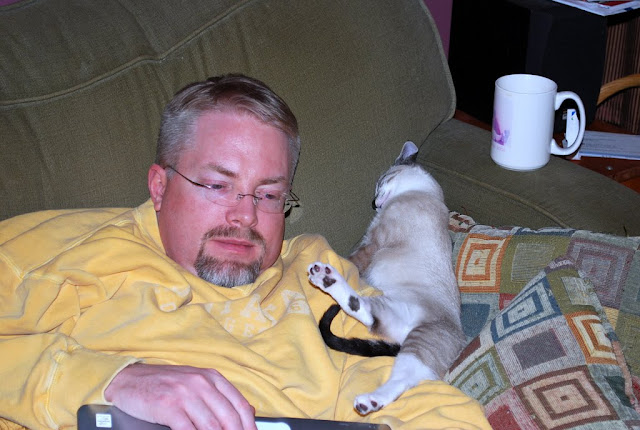 Cat blogging.  Me and my Suki.
I thought long and hard about this over the past day.  I wanted to share my reply here:

David Duez "Most memorable moment" - this really had me doing some searching this weekend. I have been lucky enough to have many, many memorable moments. I have been in a classroom since my freshman year in college ('88) and had my own classroom since student teaching ('92). After leaving teaching in 1997, I returned in 2004 at Humble High. I believe this year was my most memorable because it was so difficult in so many ways.

Aidan was born in October and sharing that birth with my students was incredible. They were so excited. But, that still wasn't the most memorable. A teaching colleague and friend that shared the lone teacher lounge with me during third periods was Mr. Braunstein. We shared a lot in common, both from the north east originally and both teaching World History. He had all of the pre-AP classes.

Near the end of the semester, he was absent a lot. One day he came in and said he was being forced to retire due to health reasons. He asked if I would take over his pre-AP classes. He said that our schedule is the same and a new teacher could just take over my classes and I could slide into his. We checked into it and the principals were all for it. So he was going to retire on the last day of the fall semester and I would take over his classes in January.

Over the holiday break Mr. Braunstein died. It was terribly sad. I will never forget that first day with his old kids and my new ones. For most of them I was giving them the news that he had passed. Facing them alone that day was probably the hardest thing I had to do as a teacher. But, I really grew from it.

At his memorial service I realized just what an impact a teacher has on their student's lives. There were so many kids there and kids that had Mr. B years ago and had since graduated. I looked around and realized that a teacher's impact is large indeed.

The next year I would lose my mother-in-law, my grandmother, and then my own father. My students helped me through that pain and I realized I had support that I never had during my days in corporate technology. We, as teachers, are a big part of our community. That community can be a big support to us through our roughest times.

The next school year I had Zach Jones in class when he passed away due to rabies. The pain was unbelievable. But, we all worked through it together.

My most memorable moments are some of the toughest that seemed terrible at the time, but today I enjoy thinking back on how strong we were. I also realized in these moments that teaching is important but it isn't life and death. I have come to believe that kids make mistakes (as do I) all the time, but we have to cherish the time we have together because we never know when that time is going to end.
Posted by Duez at 8:51 AM

Email ThisBlogThis!Share to TwitterShare to FacebookShare to Pinterest
Labels: Memories