Today was our Teacher of the Year announcement during our PLC time (we have Professional Learning Community time on Thursdays from 7am to 9am every week.  Students have late arrival).  It is always emotional for me because I was lucky enough to win our first ever voting during the 2006 school year.  Winning during the very difficult first year of our school was one of the greatest professional accomplishments that I have ever had.  So today when they named Ms. Adkins, I was emotional.

The first reason it is emotion is because of how our principals do the announcement.  At some schools I have been at, the principal would just stand up there and say, "The Teacher of the Year is ____."  Yeah.  Nothing too special.  My wife has been at schools where they just announced it over the loud speaker during school.  We do it up at AHS.  They have all of the faculty in the PAC (our fancy name for Auditorium - Performance and Arts Center) and they play a video.  The video has quotes from students about our teachers.  There were probably 30 or 40 of them.  They show a picture of the teacher, their name and the quote.

The video is quite emotional because of the wonderful things the kids write.  At the end they have drum roll, show the finalists one last time and then the winner appears on the screen.  Very exciting. 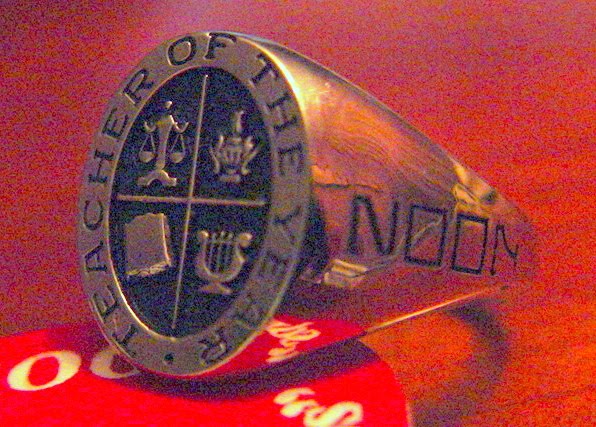 They also give us a Teacher of the Year ring.  I wear mine every day.
The first thing that I did was send our winner this year an email with my essays from the year that I won.  It is a really quick turn around to get the essays in and be considered for District Teacher of the Year.  So I wanted to give her a heads-up.  But I did warn her that I didn't want any kind of feedback about them.  She is known as the "Grammar Queen" at our school and I know how critical she can be about writing.  :)  But that is just one of the reasons she is such a great teacher.

So I though I would share my essays with the readers of this blog as well.  It has been a long while since I won 4 years ago.  I am probably 10 times the teacher that I was then.  I have learned so much since 2006.  One of the reasons I have learned so much is because I have been given opportunities because of winning Teacher of the Year.  I've gone to conferences, trainings, taught professional development and been named an AVID teacher all after winning the award.  It has helped my career.

My kids always get upset each year because I tell them not to vote for me.  The reason is that there are lots of teachers at our school who will never have the privilege of being recognized and winning.  We have over 200 faculty members and we have a very large school.  So each year I basically want my name off the ballot.  There is no reason for me to win again.  But, still I had about 12 kids write a nomination and it was great to read what they wrote.  It is wonderful to be acknowledged and wonderful to feel appreciated.  I hope all teachers have the chance to feel what I have been able to experience as a teacher.

Here are my essays:  TOY Essays From 2006-2007.
Also, here is a link to a power point that I created to showcase our great 14 nominees this year (my wonderful wife was one of them!):  TOY Power Point
A link to my personal blog with a story about winning:  Teacher of the Year
Posted by Duez at 3:14 PM

Email ThisBlogThis!Share to TwitterShare to FacebookShare to Pinterest
Labels: Teacher of the Year